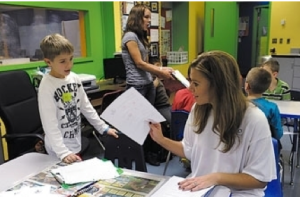 In recent years more and more parents have opted to take control of their children’s education and started homeschooling them. This trend is also being seen on many military installations as well, today more military parents are opting to homeschool their children than ever before.

The following story By KIMBERLY HEFLING Associated Press found on silina.com sheds more light on this growing trend at our military bases.

ANDREWS AIR FORCE BASE, Md. — A growing number of military parents want to end the age-old tradition of switching schools for their kids.

They’ve embraced home-schooling, and are finding support on bases, which are providing resources for families and opening their doors for home-schooling cooperatives and other events.

“If there’s a military installation, there’s very likely home-schoolers there if you look,” said Nicole McGhee, 31, of Cameron, N.C., a mother of three with a husband stationed at North Carolina’s Fort Bragg who runs a Facebook site on military home schooling.

I think we all can agree that homeschooling is more excepted today then say 20 years ago and that the number of children being homeschooled is on the raise here in the United States. Given the fact that military kids have to move so often it only makes sense that this trend may be growing even faster with parents serving in the military.

We hope you found this article enlightening, I know I did, and if so we’d like to get your thoughts on it. Especially if you are a member of a military family with children near or of school age.

Books that will make you cry

Books that will make your kids laugh